My Quarrel with Myself

An inspiring collection of spiritual and mystical poems 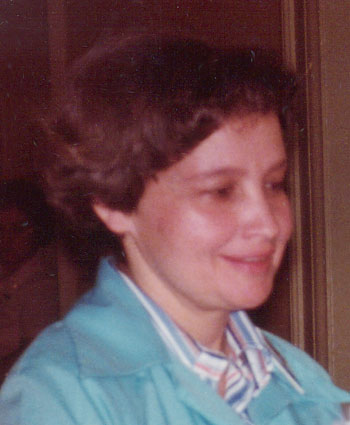 In 1982, Dr. Paul Hourihan edited and published a book of poems by his late student and close friend, Shirley Thérèse Lewis, whose work reveals the mind of a born poet. She did not discover her calling until she was forty and alas, had but a few years to harness her vision of life before cancer struck her down. Her poems show the development of a mystic mind that through meditative practice and inward discipline achieved deep reserves of spirituality that combated the destructive disease, leaving her, in the process, purified and transformed.

We believe the time has come to bring this work back into the light of day for others to benefit. Copies from the original printing are available.

Ultimately what brings a person to the threshold of saintliness is what they are―their character is their destiny. So with Shirley Thérèse Lewis. In her own estimate she was no candidate for spiritual legend, but her character, glowing with its quiet, gem-like radiance, made her such. In life luminously introspective, self-effacing, she emerges in this posthumous volume as a modern mystic in quest of divine realization, receiving as one answer to her call the agony of cancer, which for twenty-one months besieged and finally in February 1981 overcame her at the age of 44 in the bedroom of her Guelph, Ontario home….

Privately she confided that her two given names dramatized the disparate spheres of her existence. Shirley represented the ordinary, everyday part of her personality with its traditional duties and the role she assumed to carry them out as adaptively as possible. Thérèse invoked the poetic, romantic, mystic part of her life–the inner life–and included the consciousness to which she aspired: the saint’s. She acted as Shirley with others while thinking of herself as Thérèse and feeding that part of her being with meditation, with poetry, with dreams. Her life-conflict, or quarrel with herself, was symbolically a conflict between her two names and the antagonistic realities they embodied….

At its best her art achieves effects comparable to those of Emily Dickinson, whose influence is evident throughout, though the author’s own impress is always unmistakable. Her power of distilling a remarkable degree of significance in a few lines almost equals that of her Amherst mentor, with whom she felt a unique bond. Many of the poems are like atoms of thought that must be split–by an intensity of reader-concentration matching the heat of her own–before the explosion of meaning follows, a sudden piercing through the veil into a luminous area of the mind were truth abides….

“It is clear that by her death I have lost the opportunity to encounter both a remarkable intelligence and an extraordinary personality. In an aphorism that seems to be echoed in the volume’s title, Yeats said that we make rhetoric out of our quarrels with others, poetry out of our quarrel with ourselves: Shirley Thérèse Lewis’ astonishingly compressed process of development as a poet seems to be closely connected with her instinctive understanding of this insight. The poetry that she did have time to leave behind her reflects not only her giftedness but her courage both to live and die with a rare intensity.”

“My Quarrel With Myself is a powerful, compact collection of provoking ideas. Its lack of clear image, next to obscure, makes the reading and re-reading more tantalizing…. Shirley Thérèse Lewis did not write for people seeking entertaining, comfortable verse … but for people seeking the “how” of life’s truth―spiritual perfection. We should be grateful that Shirley’s use of the poetic process achieved such heights in the brilliant, but brief, period of time that was given her.”

Immersed in liquid light,
All things around are changed,
As souls to joyous flight
To a world of brightness range.

From this drab matrix souls ascend,
Space centreless and sere,
To shining regions drenched in light,
Bathe in effulgence there.

From her journal of December 20th, 1976:
The Winter Solstice…. After a disturbing and anger-filled four days, peace descends. At 10 pm I sit for meditation. Immediately upon sitting, the sensation (but this is not a good word) is one of an enveloping light. The light is outside of me. It comes closer and encompasses me, and I become the light itself. The experience is one of utter and complete ecstasy, as all notion of the small ‘self’ is lost, totally obliterated in this pulsing, throbbing joy.